How the Process Works

Our products are 100% cloud-based, so you and your users receive new features and updates automatically, without needing to install or update any software. However, you can still control when new features become available for users.

We are always excited to bring you the newest features as soon as they are ready, but we have heard from some customers with complex IT environments that they would like more notice before new features are deployed to their users. To address these requests, we created a feature release process aimed at helping you balance the benefits of accessing improvements as soon as they're ready with the task of integrating the changes into your organization. While we do not have a release schedule since apps are released based on when they are stable, we try to give you plenty of notice before push upgrades so you have time to test.

We do release new versions more frequently than we publish to the AppExchange. These versions may contain new features or improvements that are not yet available in the AppExchange version and will be push upgraded to Sandbox environments when they enter Beta. If you’d like to install these versions before they are published to the AppExchange, links that contain the latest Beta and Released versions of the apps are available upon request. Because of this, Sandboxes may have a newer version of the product than your Production org. 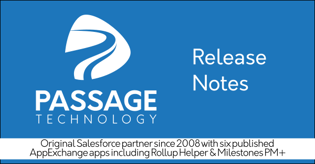