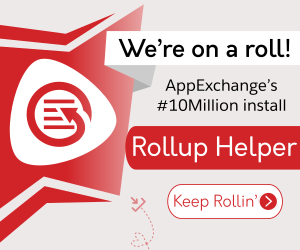 Due to the growth and expansion of their company, our client was seeing a high-volume of rollup settings in Declarative Lookup Rollup Summaries (DLRS) and needed an efficient way to convert them. The company had recently purchased another company, which had increased the amount of rollups the Admin needed to manage.

The client had various products that they needed to roll up the quantity for, and then report these numbers to management. However, they were experiencing limitations with the Salesforce currency field to roll the assets into the accounts. They needed to report the Monthly Recurring Revenue (MRR) based on the assets, so this was a limitation from a system perspective, which they had to override. They had been using Declarative Lookup Rollup Summaries (DLRS), but they needed to roll up a field on the opportunity, which was a currency field where DLRS didn’t populate data. Because they were having issues with the currency field and had to manage large volumes of rollups one by one, they chose Rollup Helper to achieve their goals.

When you have DLRS installed in your org, a button on the All Settings page appears labeled "Convert Rollups” (see image above).

After clicking the Convert Rollups button, all the DLRS settings are displayed in a table. You simply select a DLRS setting and are redirected to the rollup Save/Edit page (see image above).

Since they also needed to roll up a field on the opportunity, which was a currency field where DLRS didn’t populate data. The DLRS Converter allowed them to do this; you can choose any field to rollup information, and rollup from that field.

The information from their settings was translated to a rollup, which included the target object, target field, source object, source field, relationship field and rollup type.

Next, they saved their rollups and added filters to them. Rollup Helper made this easier, since it allows users to develop queries automatically (no SOQL knowledge required) with over 30 pre-canned date filters.

Using the DLRS Converter eliminated the need to manage large volumes of rollups one by one, which added efficiency to the client’s process.

Note: This Rollup Helper use case came from a customer. If you have a Rollup Helper Use Case, please submit it to marketing@passagetech.com. Submitting use cases allows everyone to get the most from their investment in Salesforce.